"We have to go straight to the devil!" 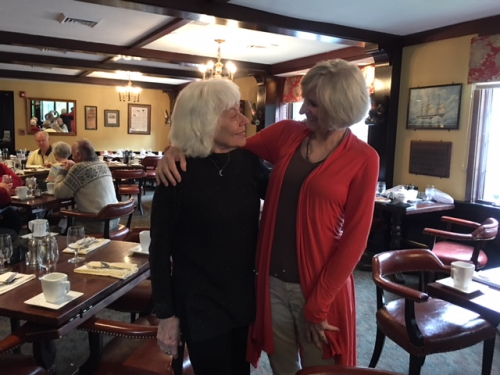 Ah, Writerly Women. On the very first morning of my amazing trip to Concord, Massachusetts, (which you'll be hearing about, probably ad nauseam, in the weeks to come) I met a marvelous fellow writer named Marjorie Meret-Carmen. She is the founder of a small publishing company, Moonglade Press, which is publishing 'new works by uncommon voices.' Her current project, as she faces her eighth decade in this life, is a historical fiction saga entitled Perceptions involving Henry David Thoreau. I won't tell you more, except to say that it promises to be very real.

In one of our all too short but intense conversations I told the Marvelous Marjorie about our blog and this month's topic and asked her our question: how do you handle going deep? She didn't even hesitate before answering.

"Oh, you have to go straight to the devil! "

She laughed, something she has apparently done often and well in her years of full-out living, but she quickly grew serious and continued:

"To write about good and evil in these times, you have to be very imaginative. You have to show how frightening it is."

We do indeed have to show our readers evil in its reality. Nekkid, as we say here in the South. Not the spooky Halloween version that gets packed away on November 1st, but the truth of the thing. As we discussed in our last post, we can't gloss over  the grit of sex trafficking or paint a romantic picture of the ugly face of war or soft pedal the rock bottom crash of depression. If we aren't going to tell the truth, why bother to write about it at all?

The question is, how do we know we're doing that? As always, I can speak best from my own experience, and here's what I've found:

*    I write about the darkness I've seen myself. Until the miracle of medication and a gifted therapist and ongoing inner work with God, I used to suffer bouts of clinical depression. I know the tunnel of anxiety and hopelessness you can't find your way out of, and I called upon that in writing about Sullivan Crisp and his clients in the Healing Stones, Healing Waters, Healing Sands novels. I'm no stranger to an eating disorder, which inspired me to write the YA novel When Is Perfect Perfect Enough?  Many of my characters have endured the loss of loved ones because I had to grieve the death of my brother and father at a young age. It's not a matter of exploiting your emotional life in a calculated way - it's more a way to say, "I've been there ... I know what it's like ... you're not alone." And sometimes, only a person who has felt the anguish can write it.

*  I know I'm getting it right when can feel it viscerally.  Here's an example. In Healing Stones, therapist Sullivan Crisp is on his own agonizing inner journey, and at one point he experiences a panic attack. I wrote, rewrote and revised that scene so many times and still couldn't quite get it there. The scene takes place in a car going over a bridge, and Sullivan comes very close to driving his vehicle off the side, just as his wife did twenty years before. I obviously wasn't going to get into my Volkswagen and reenact that, but I did go down to the water's edge (I live on a lake) and envision the scene as Sully in slo-mo until the pain he'd stuffed through all his efforts to heal everyone else finally erupted. I went back to the keyboard and wrote -- chest aching, palms sweating, fingers trembling so that it was difficult to type. When Sully pulled his car over to the side of the road at the bottom of the bridge and rolled down his window to talk to the concerned officer who' followed him, both of us were surprised he could even speak. That's when you know you've gone deep enough.

I think it's the motive that guides us. If we want to go deep and dark just for the sake of it, just to be considered serious writers, we'll be about as deep as the nearest puddle. While I was in Concord last week (I told you this would come up again!) I visited The Old Manse, which is the house Nathaniel Hawthorne and his bride Sophia Peabody rented for the first three years of their marriage. Nathaniel had  written a few short pieces but he wasn't well known yet, and he was using his time there at the Manse to find himself as a writer. He sat at this desk (see photo at right), facing the wall, and, it is said, thought and wrote serious thoughts. 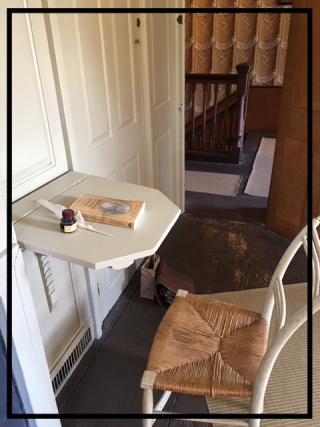 Are we surprised he didn't come up with much? It's probably a good thing he and Sophie were kicked out for not paying their rent and had to move back to Salem and live in the House of the Seven Gables or we wouldn't have the book by the same name, or the Scarlet Letter ... but I digress.

Writing deep is first about having conviction and being committed to the truth no matter where it takes us. I don't think we can be afraid to go there. Especially if we're not just doing it to be darker, grosser or sexier than the last freak-out novel that was written. We're not talking about sensationalism. We're talking about real. And aren't we always?

In next week's post we'll talk about what happens after we dig deep, get dark -- 'go straight to the devil' -- which is something GLORIA brought up in her comment in case you want to check that out. If YOU want to comment -- and I hope you do -- will you tell us why you think we write about the tougher side of life?

GLORIA  has "a small milestone to report":

After, like, a year of knowing it's something I need to do, I finally started a social media presence on Twitter!!!

I had downloaded the Twitter app after deciding that it would be my Writing Social Media Of Choice... then didn't touch it for three weeks. XD  So yesterday when I was with my writing group, I announced that I would like them all to walk me through setting up an account.  It was so much easier and so much more fun when I had them all watching and saying 'yes, that's good' 'now you push that button' 'it looks great' 'just push the button' 'I'm telling all my followers that you're on Twitter'. 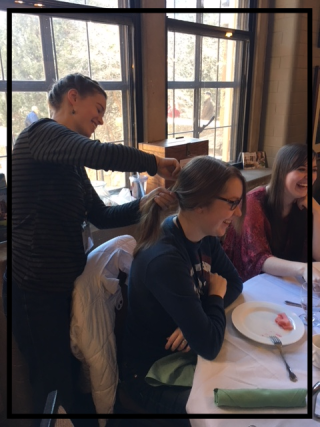 Here's to the little steps forward!

I would also love to have your prayers for this weekend when for the first time I'm hosting a two-day Intensive here at my home for three clients who are coming together to immerse themselves in all things writerly. There WILL be pictures in next week's post!

This post gives a lot to think about.
I think, perhaps why we write about the tougher life is because everyone goes through hard struggles and they want to know that they aren't alone, that others have struggled to, and that there's hope for them.
When you see a character struggle then succeed, it gives hope that, well, maybe you can too. I think that's why books have such a strong impact, and why the wrong books can lead you to put your hope in something that will ultimately fail you.
The right book, on the other hand, can be a tool that God uses to reach out and pull up someone who's hit the bottom.