Home Archives Profile Subscribe
Do You Hang Out With Your People?
How Low Should We Go?

We Have Met Our Audience ... And She Is Us Favorite Client Quote of the Week:

Me: What's your writing goal for this week?

I have to admit, my writerly women, those words have never crossed my lips. But SKELI can say that because she knows her audience. To quote her further:

Nerds are a fascinating tribe. Nothing like a ComicCon for rubbing shoulders with my audience...everyone from cosplayers to comic artists. It is where fantasy readers flock as well. There is such a fluid relationship to identity there. Preferences may be judged (or spawn a lively debate; why or why didn't the LOTR movies blow chunks?) but people rarely are.

You see why I love Skeli's writing as much as I love her nickname. And her.

GLORIA (shown at left) is still trying to get her typical audience member into focus:

I've been thinking a lot about who my audience is and I know I have a picture. I have a person standing before me, but she's blurry. Out of focus. I tried writing down who she was and got stuck after 'Girl in her teens, hair pulled back into a simple ponytail. She’s scared of the dark because that’s when her mind refuses to shut off with the light'. I guess she's a mix of myself in my early teens and the girls I've gotten to know in my writing circles and church. Even so, there's something still hidden about her.

What strikes me in both of these is that SKELI and GLORIA recognize their audiences are, well, in part themselves. That's huge, because if we stand too far from the people we're writing for, we can come across as:

Of COURSE we write from the wisdom we've gained or we'd just be one hot mess talking to a bunch of other hot messes, right? But if we've never been stupid, our wisdom isn't going to make for an authentic story.

Let me see if I can sort that out using some of my own books as examples. I hope that doesn't come across as narcissistic, but it's what I know for sure.

In every case, I had to know my audience, and in essence my audience was women like me who needed to hear the message I myself had to hear and apply at some point in my life. You can see how that changes slightly with each thing you write, yes?

As we end our September month of finding that audience member who perches on the edge of the screen or hangs out at the side of the desk, sipping a latte as we write, maybe we should see her (or him) as partially a reflection in our mirror. 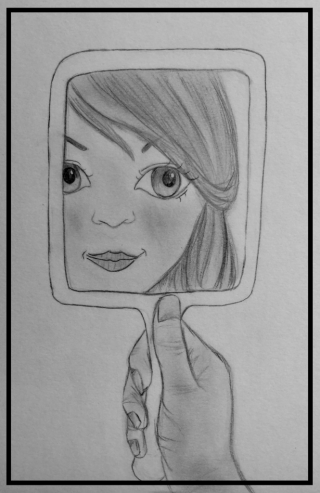 For me that would be that side of myself who thought she had it all together and just needed to check in with God now and then to see how I was doing. Perhaps writing my current books is a reminder that she can't live here anymore ...

If you want to comment, and of course I hope you do, will you tell us how your audience has a bit of you in her? If you're going to hang out with her in the writing of an entire novel -- or even a series -- or perhaps the season of a short story -- it might be good to find out what you two have in common.

Also, I'm considering what our theme will be for October. Anything YOU would like to know more about when it comes to being a writerly woman?

Alas, the only persons hovering near my screen as I write are likely to be leaning against the bookshelf with a cocksure half smile and a tankard in hand!